Taking it to the Trails

Taking it to the Trails: Latest round of upgrades courtesy of Maine Conservations Corps

The summer of 2018 brought a significant improvement to the Farm Loop Trail, whose nearly three-mile network of trails invites thousands of visitors each year to traverse the diverse mix of ecosystems that make up the Wolfe’s Neck Center property. Thanks to the efforts of crew members of the Maine Conservation Corps, who spent three weeks camping and working at WNC, the trail was made safer and more navigable after heavy winds and rain had uprooted trees and brought other damage along the sought-after route.

The work of MCC continues here at Wolfe’s Neck Center, as do our continued efforts to connect the farm, forest, and sea in a safe and accessible way with the ongoing expansion of the Farm Loop Trail. While last summer’s work focused on the area of the trail along the Little River marsh and northbound, renewed grant funding for 2019 enabled us to make improvements to the section between Middle Bay and West Bay of our campground. This section has now been rerouted to address concerns of safety, trail durability and to address concerns around erosion. The project was generously funded the Onion Foundation, whose mission is to encourage conservation and stewardship of the natural environment and to promote music and the arts in the state of Maine.

Seven crew members arrived eager to support our efforts as part of a two-week undertaking in mid-August. The first item to address was rerouting the trail. It formerly had an access point going through a campsite in Middle Bay, and will now bypass Middle Bay to make it more publicly accessible. This new route instead takes hikers on a scenic path with open pastures and views of the campus on one side and forest on the other with intermittent views of Casco Bay.

Watch a time lapse of the crew members installing the 52-foot bridge!

Next was the need to invest in long term plans for a more sustainable trail system that limits future erosion concerns. The crew built four new bridges—one that’s 52-feet long—which should be stable for several decades. We invite you to see the progress that was made and, if you are a regular trail-goer at Wolfe’s Neck Center, to notice the extent of these improvements.

There’s no limit to future ideas for this section of the trail and for the Farm Loop Trail as a whole. But for now visitors can expect a special experience, where they’ll have the chance to walk right along the pasture and see cows up close. This, along with this year’s improvements to the trailhead behind the Livestock Barn and the new addition of the Discovery Trail leading to the organic dairy barn, make for enhanced ways to spend your time at Wolfe’s Neck Center, connecting to food, farming, and the environment. 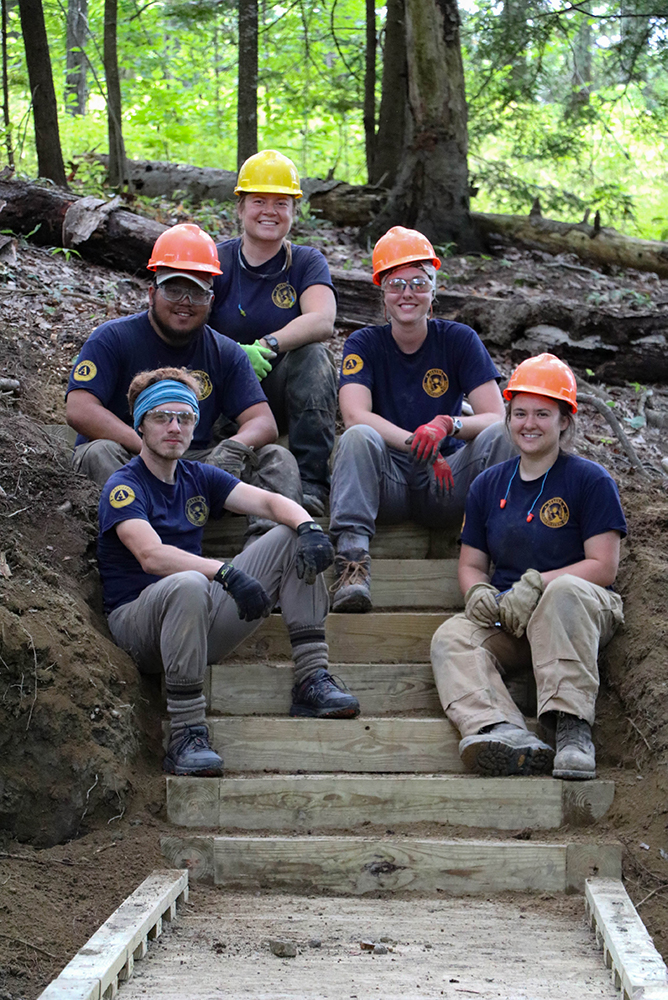