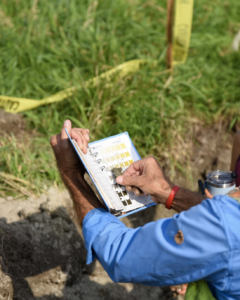 Did you know that Maine has their own association of professional soil scientists? The Maine Association for Professional Soil Scientists (MAPSS) was formed in 1978 with the mission of promoting soil science through peer exchange and education. The membership includes soil scientists and geologists with different professional backgrounds and expertise in both government and private sectors.

MAPSS recently held their annual field workshop at Wolfe’s Neck Center for Agriculture & the Environment, so we tagged along to see what they were up to! Forty members and soil scientists descended on the property to assess soil pits that had been excavated in our pastures, in our campground, and in Wolfe’s Neck State Park. The workshop focused on soil parent materials, human-altered or human-transported materials, and hydric soil characteristics and determinations.

What is parent material?

Parent material is the minerals, rocks, or organic matter that forms the soil.

What are human-altered or human-transported materials?

Human-altered materials are soils that have been manipulated by Homo sapiens. For example, our agricultural fields have been plowed and tilled in the past, so the soil has been altered by humans.

What is a hydric soil?

A hydric soil is one that has been saturated long enough to restrict oxygen and impact the growth of plants. These soils can help professional soil scientists determine the height of the water table in a soil profile. 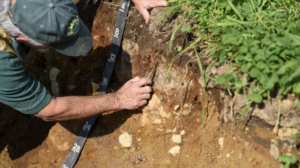 The soil scientists spent the morning examining the profiles of the soil and determining the texture, color, and the depth of the water table at each site. A soil profile is the vertical section of a soil that exposes the soil’s layers or horizons. There are six horizons (O, E, A, B, C, R) which tell the story of the soil.

Why does this matter?

After the morning of soil analysis, the scientists came together at our Mallet Barn to discuss and debate their findings. Soil scientists analyze the horizons to make land management decisions, including whether to build, if a septic system can be installed, or if the soil can support agricultural production, and what kind of agriculture is best suited to this land. 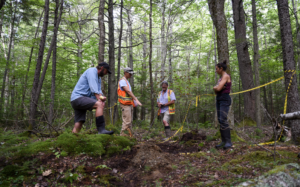