A Ride to the Past 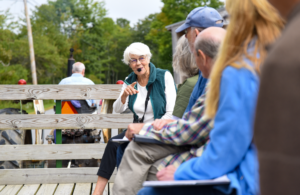 On Saturday, September 18, 2021 I hopped aboard the history wagon ride offered through Wolfe’s Neck Center’s community & visitor programs, hoping to learn more about the history of this land and its people. In my communications role on Wolfe’s Neck Center’s team, it is my responsibility to help tell the stories of the current-day farm, but of course, so much of the present has deep ties to our past.

The two-hour tour was led by the dynamic duo of Jim DeGrandpre and Kathy Smith. Jim is our Director of Visitor Services and Kathy is an acclaimed local historian, both with special ties to this place and area. Jim arrived at Wolfe’s Neck Center over five decades ago. In October 1968, Mr. and Mrs. L.M.C. Smith invited Jim’s father, Charlie DeGrandpre, to join them in Maine to develop their visionary organic beef farm, with a focus toward educating and demonstrating organic principles. Jim’s family even lived in the Little River Farmhouse, which now houses our admin offices and serves as the hub for educational programs. Kathy is married to Sam Smith, one of Mr. and Mrs. Smith’s children and long-standing board member. An impactful historian, neighbor, and steward of Wolfe’s Neck, Kathy’s institutional knowledge is invaluable. Together this pair guided our group of 20 through centuries of historical knowledge and present-day facts.

We first gathered at the Little River Farmhouse’s tent where each attendee was handed a binder full of maps, genealogy charts, old letters, and photographs. Then we climbed aboard the tractor where Jim served as chauffeur and Kathy as tour guide. Every few minutes, Jim stopped the tractor so he and Kathy could share an anecdote, historical or cultural relevances, and answer questions. Our stops included:

The tour also touched upon the regenerative agriculture practices that have been employed on this land for decades. The Smiths were committed to the future of Maine farming, to the new idea of organic agriculture, to conservation and the preservation of open space, to public access to the sea, and to the preservation of historic buildings and sites. 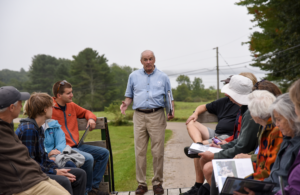 Kathy and Jim also spoke to the fact that Wolfe’s Neck Center operates on the historic lands of the Abenaki people – members of the Wabanaki Confederation of Native people in Maine. We acknowledge and honor the tribes who comprise the Wabanaki Confederacy – the Penobscot, Passamaquoddy, Maliseet, Abenaki, and Mi’kmaq peoples – who have stewarded these lands for centuries. We respect the traditional values of these Tribes and affirm their inherent sovereignty in this territory. The Wabanaki are the first peoples of northern New England, and have lived on this land for over 16,000 years. Wabanaki means people of the dawn, and Maine is the first place in the United States where the sunrise touches the Atlantic Coast. 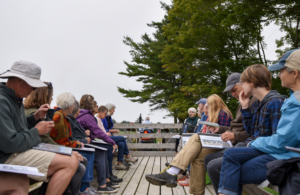 The tour was an incredible tribute to the people who worked these lands for hundreds of years. As Wolfe’s Neck Center looks to farming and food for the future of our planet, it is important to remember our past and the role early stewards of this land played. While this was the last history hay wagon ride of the season, we hope you’ll join us next spring & summer as we continue to share the historical relevance of this special place.

For more photos of the event, please click here.