The upcoming spring sunshine will mean much more at Wolfe’s Neck Center this year. This March began the installation of two large solar projects on the campus: one at the site of the new organic dairy facility and the other on the Pote Barn, which was renovated in 2017. With the completion of these two projects, WNC will become 50% solar-powered, with an end goal to be entirely solar-powered in the next few years.

The organic dairy program has made significant progress since launching in 2015 but has been operating in a barn not initially intended for dairy farming. The ongoing construction of an entirely new facility has created optimum access for solar gain unlike any of the other rooftops on campus. With operations at this new site beginning in May, ReVision Energy was able to complete the installation of this project before it begins use as the hub of our dairy program. 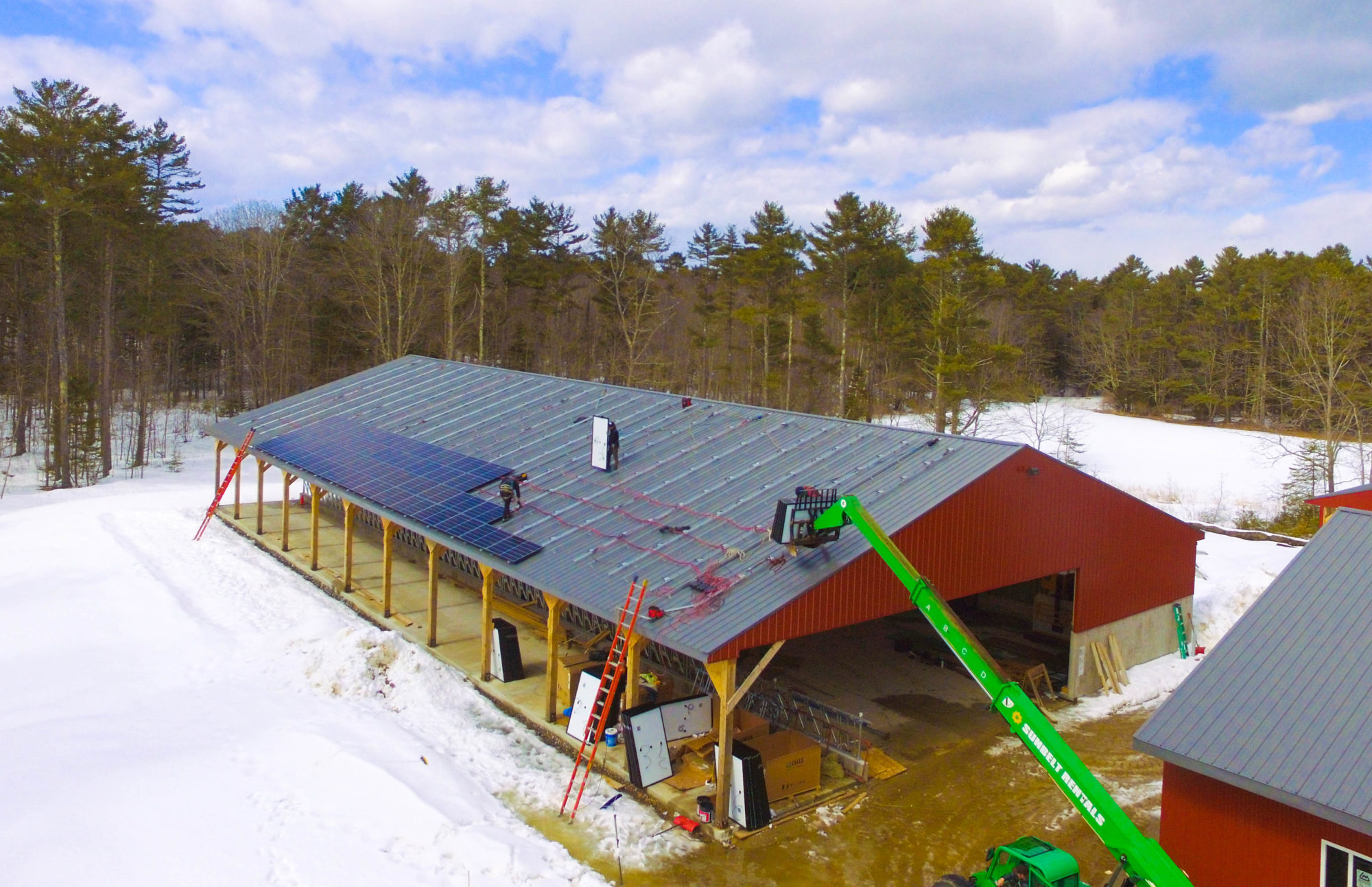 The 98kW system takes 234 solar panels to cover the South-facing roof. The size of the project is based on a calculation of the maximum amount to offset as much of an electric load as possible. ReVision takes three factors into account when designing a rooftop array: orientation (due South is ideal), pitch (in Maine, 35-45 degrees is ideal), and shading (not having too many trees). During the planning phase, designers came onto the roof with a fisheye photo lens to show how much sun the new roof will get throughout the course of a year. They then determined how many panels would fit on the barn roof, and how many would be needed to offset the electric load of the farm’s operations.

Despite several inches of snow still on the ground at the time of the install, the ReVision crew works year-round. They stay off the roof during snowstorms and other unsafe weather conditions, which delayed them one day, but otherwise they’re out there with a team of 4-6 people.

How the Panels Work

Once the installation is complete, the panels will be active and ready to create electricity. First the sunlight will hit the panels, sending electrons through the wiring. This creates direct current (DC) electricity. The power still needs to be converted to alternating current (AC) electricity in order to flow through the barn’s circuit panel and be available for use. ReVision installed a solar inverter, which converts the captured DC power into AC power. The energy produced can be used in real time. 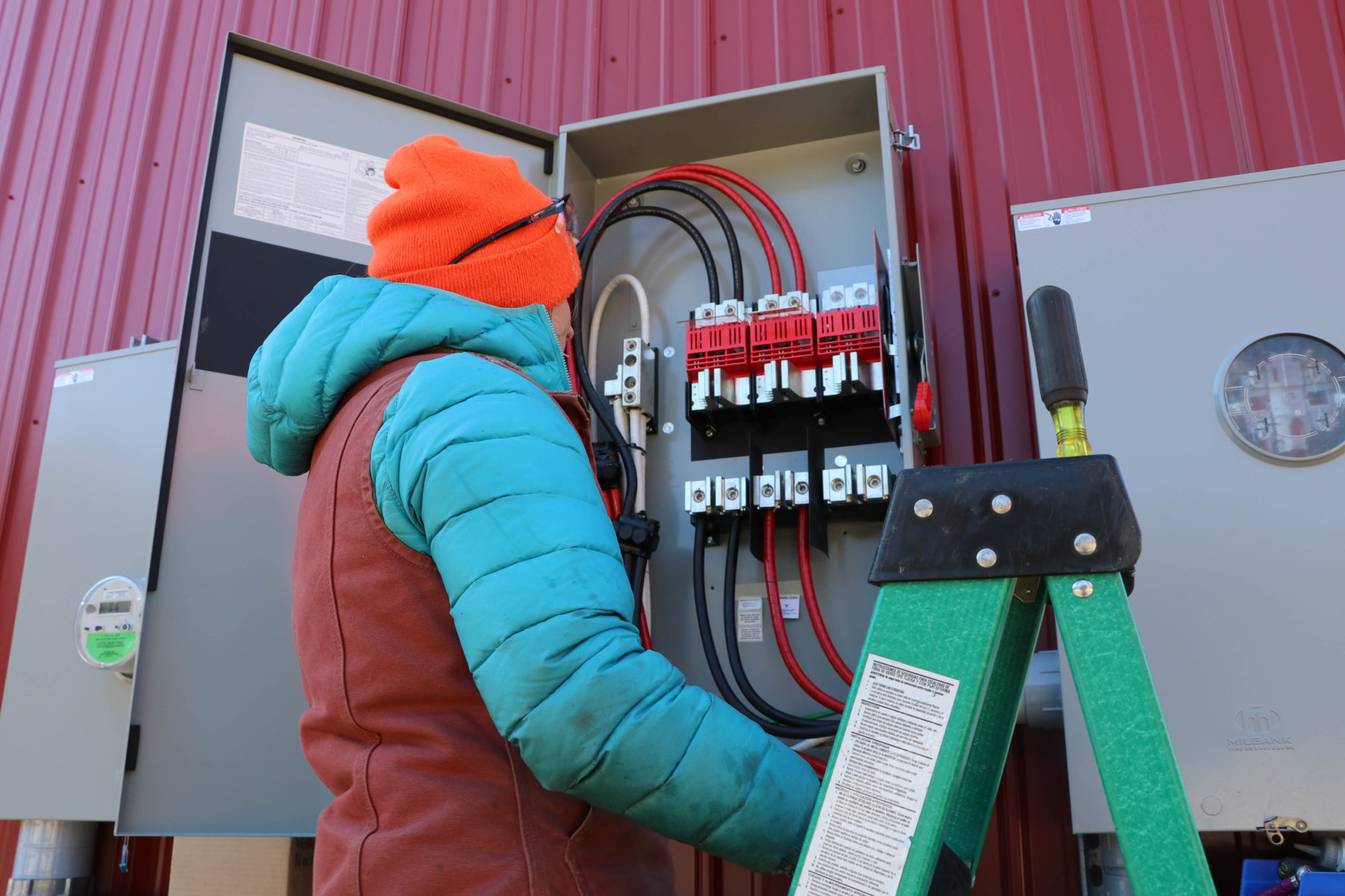 Any excess power that exceeds the needs of our farming operations is sent to the grid, tracked via a separated meter. At the end of the month, the utility company (CMP in our case) uses net metering to reconcile the difference between how much solar energy was produced versus how much electricity was consumed. If we produce more than we use, the excess becomes a credit that can be used later in the year. Or, if we produce less than we used, the remainder is billed as usual.

Why WNC is Going Solar

Over the past several years, in conjunction with the launch of the organic dairy program in 2015 and a name change in 2017 from Wolfe’s Neck Farm to Wolfe’s Neck Center for Agriculture & the Environment, WNC is undergoing a major reinvestment in the campus. After many discussions with ReVision Energy over the past few years to move towards renewable energy, it was determined to align the solar project with the construction of new buildings that had maximum solar gain.

As part of its overall Master Plan, WNC developed a two-phase plan for solar that, when completed, is sized to meet 100% of the organization’s electrical needs. This is a critical first step in transitioning the entire WNC operation to renewable energy.  As with everything else WNC does, this solar project will be a resource and model to educate the public on the importance of reducing our impact on the environment.

ReVision Energy is a local, 100% employee-owned company on a mission to accelerate New England’s clean energy transition from fossil fuels to solar energy. As a Certified B Corporation, ReVision Energy is part of a global movement using business as a force for good to solve social and environmental issues. ReVision Energy consistently ranks among the best solar companies in the nation. The company was named 2017 Top Solar Rooftop Contractor in New England by Solar Power World and 2018 Best Solar Energy Company by New Hampshire Business Review. Learn more at revisionenergy.com.